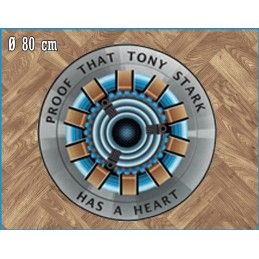 Iron Man: the genesis of a character to whom incredible collectibles are dedicated

Iron Man is the alter ego of Anthony Edward Tony Stark , a Marvel Comics character created in 1963 by Jack Kirby, Stan Lee, Larry Lieber and Don Heck. Tony Stark is a brilliant inventor, playboy and philanthropist who owns Stark Industries , created by his adoptive father Howard Stark . The genesis of Iron Man originates during the Vietnam War (later revised in the war in Afghanistan in today's storyline) when he is kidnapped by the Viet Cong and forced to create weapons for a warlord; Tony Starkinstead he creates a metallic exoskeleton to fight and escape his captivity. From the scientific development of this first armor, all subsequent versions of Iron Man armor are born up to those we know today. In the course of his adventures Iron Man allies himself with many characters and fights with numerous villains, many of which are present in the Games and Comics offer dedicated to the collectibles of the Marvel superhero ; action figures , bobble heads , statues , board games , model kits and various gadgets are available on the Online Games and Comics Shop with unique promotions.

Statues, bobbleheads and Iron Man action figures from the best series and brands

From the various sagas that have seen Iron Man protagonist in comics , films and cartoons , several series of collectibles of great charm have been born such as: SH Figuarts by Bandai , Funko Pop! Marvel by Funko , Marvel Legends by Hasbro , Marvel Select and Diamond Gallery by Diamond Select . Along with these series, the Online Games and Comics Shop also offers statues , bobble heads and action figures from well-known brands in the collectibles sector such as Neca , Iron Studios , Hot Toys , Beast Kingdom and Square Enix .

In addition to the collectibles you will also find board games dedicated to the superhero in armor par excellence and gadgets of different types such as mugs , doormats , posters and masks to have Iron Man with you during every moment of your routine. Discover the whole offer dedicated to the Marvel hero Iron Man designed exclusively for you by Games and Comics with many discounts and essential offers.

Games and Comics has selected for you the best collectibles , gadgets and Iron Man themed board games with which you can enrich your collection with unique pieces. Action figures , bobble heads , statues and high quality model kits are waiting to be displayed in incredible poses that will transport you inside the Marvel Universe . Don't miss the incredible promotions dedicated to many products from Games and Comics .