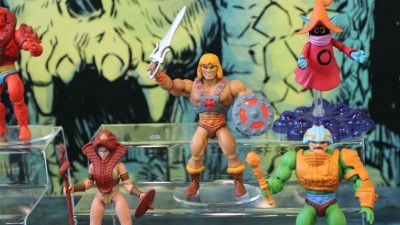 He Man is a fictional character from the Dark Fantasy genre saga, He Man and the Masters of the Universe, in Italy known as the Dominators of the Universe.
This saga was born as a line of toys created by Mattel in 1981 which is then followed by an anime consisting of two seasons of 65 episodes each.

Eternia is the world in which the saga is set in which He Man, the most powerful man in the universe, is the protagonist, and the plot tells the battle between the hero and his archenemy Skeletor, an evil dark sorcerer who has the goal of conquering Grayskull Castle and all of Eternia.
Many different characters take part in this incredible saga in support or against the incredible He Man; his most valiant companions include Battle-Cat, Man At Arms, Stratos, Teela and Zodac, while Skeletor's most loyal followers are Evil Lyn, Beast Man, Mer Man and Tri Klops.

Discover all the collectibles we have chosen for you

Games and Comics has selected for you many figures dedicated to this immortal series that over the years has seen in addition to the main series also several sequels, spin-offs and remakes such as She-Ra and The New Adventures of He Man.
On our Online Shop waiting for you you will find different types of collectibles such as action figures, bobble heads, mini figures and replicas of the most important brands in the collectible sector such as Factory Entertainment, Funko, Mattel, Super7 and The Loyal Subjects.

Within our offering you will find masterful representations of the most famous characters and objects from the series such as Webstor, Stinkor, Beast Man, Fisto, Green Goddess, Skelegod, Moss Man, Tung Lashor, Sorceress and many more.
Let's now discover some of the latest news chosen for you by Games and Comics to present you some of the best proposals available on the Online Shop:

He Man and the Masters of the Universe - Hordak action figure 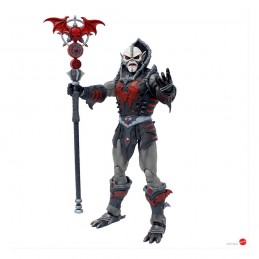 The Mondo brand presents its new series dedicated to Masters of the Universe action figures, with an incredible figure dedicated to Hordak, the powerful leader of the Infernal Horde, a legion of monstrous and wild warriors who as a distinctive symbol have a red bat on the chest, to represent their loyalty to their leader and constitute the third faction of the saga that clashes with both He Man and Skeletor.
This 30 cm tall figure is fully articulated and full of accessories and interchangeable parts to offer the possibility of being displayed in the way you prefer. 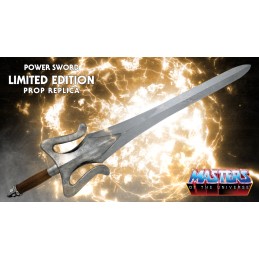 Factory Entertainment presents this incredible 1: 1 scale reproduction of He Man's inimitable Sword of Power.
Facts to scream and extreme level of detail make this sword a real gem for fans; produced in steel with super shiny chrome finishes and a ribbon to wrap the leather handle make this deluxe replica unmissable, able to meet the needs of even the most fussy collectors.
Inside the deluxe package there is also a wall plate to hang your sword. 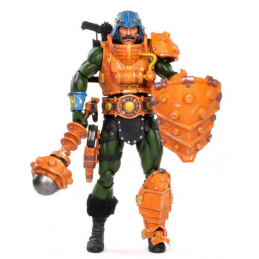 From the animated series of the 80s comes the figure signed by Mondo di, Man at Arms, whose real name is Duncan, an inventor and soldier, as well as adoptive father of Teela in the saga and mentor of Prince Adam, as well as one of the three people to know the true identity of He Man.
In this action figure about 30 cm high, made of pvc, Menetarus, as he is known in the Italian series, is fully articulated and accompanied by numerous accessories and interchangeable parts.
Man at Arms is definitely a cult figure for all fans of this saga not to be missed for any reason.

He Man awaits you on our Online Shop

Now that you know our offer you are ready to make your way to our site in the section to ensure all your favorite figures without losing the opportunities we have dedicated to you.
You will find lots of news constantly, so don't miss the incredible figures in our catalog for your collection dedicated to He Man and the Masters of the Universe and to all the other series dedicated to the iconic character of He Man, the strongest warrior of the universe, always accompanied by her Sword of Power.

He enters Eternia with us to continue to cultivate your passion for this immortal saga.