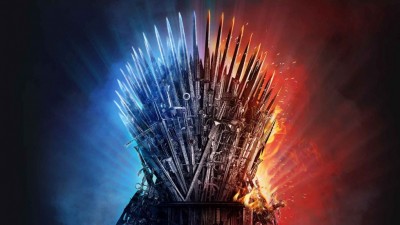 The Throne of Swords is one of the most popular series of the public in recent times, recognized worldwide also thanks to the achievement of many awards won by the homonymous TV series.
This saga is taken from the cycle of novels a Song of Ice and Fire written by George R.R. Martin and narrates the adventures of many different characters, within the world formed by the continents of Westeros (western continent) and Essos (eastern continent).
Many protagonists follow each other throughout the saga, experiencing incredible adventures, often linked together in order to reach the Iron Throne, or the one on which the ruler of the Seven Kingdoms sits.
The charm of this saga and the wide success it has achieved has led to the creation of incredible Game of Thrones action figures that portray the most famous characters in their most representative poses, ready to enrich the collections of all fans with figures of the highest quality. .

On the Games and Comics Online Shop, a fantastic area dedicated to Game of Thrones awaits you where you can find the best collectibles dedicated to this saga with action figures, gadgets, statues, replicas, mugs and many other incredible accessories dedicated to characters and most characteristic objects seen throughout history.
From collectible figures to everyday objects, together with us you can choose everything you want to always have something with you that reminds you of the incredible universe of Game of Thrones as you prefer.

The Night King, Bran Stark, Tyrion Lannister, Joffrey Baratheon and many other characters await you, along with the symbols of their families, with creations from the most important brands in the world of collectibles such as McFarlane, Trick or Treat Studios, SD Toys, Noble Collections, Pyramid International, Mattel and many others.

Now, however, we want to introduce you to some of the latest creations signed by Threezero that incorporate some of the most beloved characters of the series in a masterly way, with an attention to detail never seen before, as well as a large number of interchangeable parts to customize your figure. 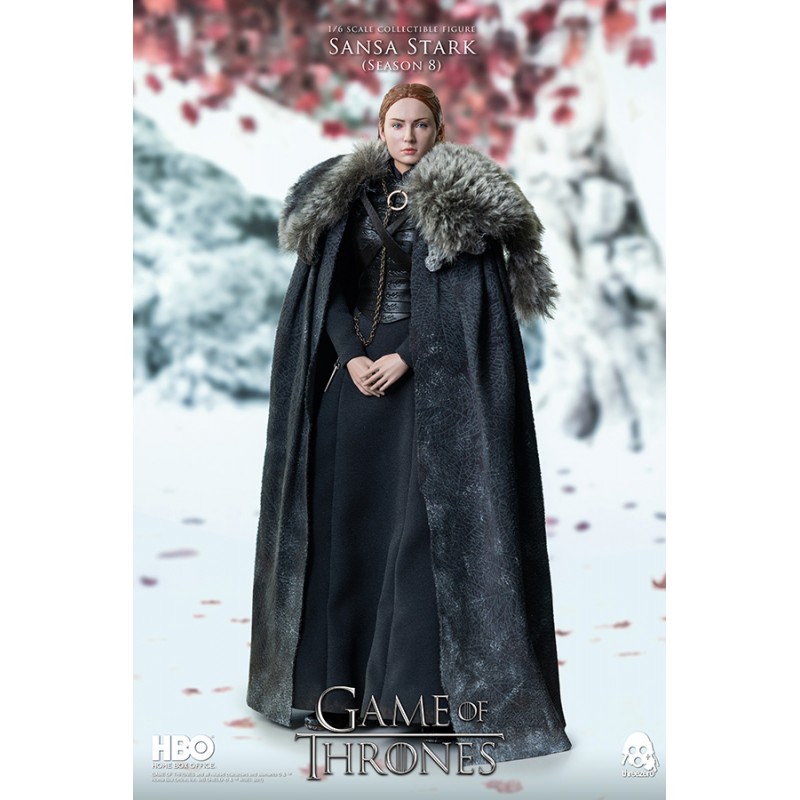 The Queen of the North, Sansa Stark is the second child of the Lord of Winterfell Eddard Stark and Catelyn Tully.
Protagonist in all eight series of the saga, Sansa eventually manages to secure the throne of her homeland to guide her in a just and noble way.
In this action figure she is portrayed in typical great winter clothes, with a black dress and a large cloak surmounted by fur padding; all made entirely of fabric to ensure a realistic and extremely detailed effect of the figure. 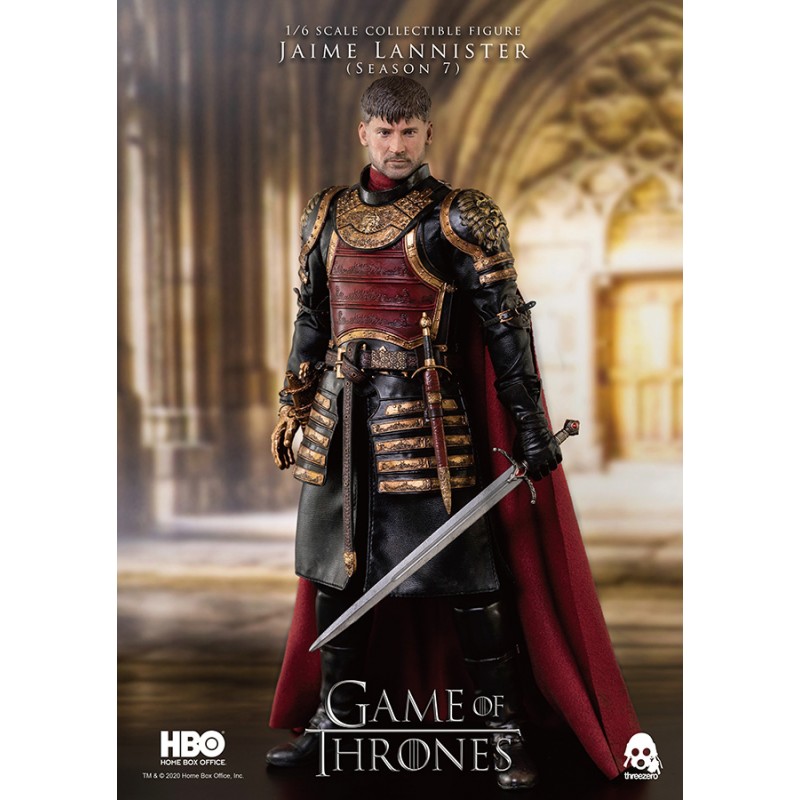 One of the most skilled warriors of the Seven Kingdoms, Jamie Lannister is the first son of Lord Tywin Lannister, and twin brother of Cersei Lannister.
Jamie Lannister's adventures within the saga see many ups and downs, from being one of the members of the Royal Guard, he goes into captivity, to the loss of his right hand, with which he held the sword.
In this figure of Threezero, in fact, a version of Jamie Lannister is represented following his mutilation, with the golden hand worn to replace the missing limb.
Dressed in his battle armor and with the ability to wield different weapons, Sir Jaime, in this highly customizable figure, expresses all his magnificence and elegance. 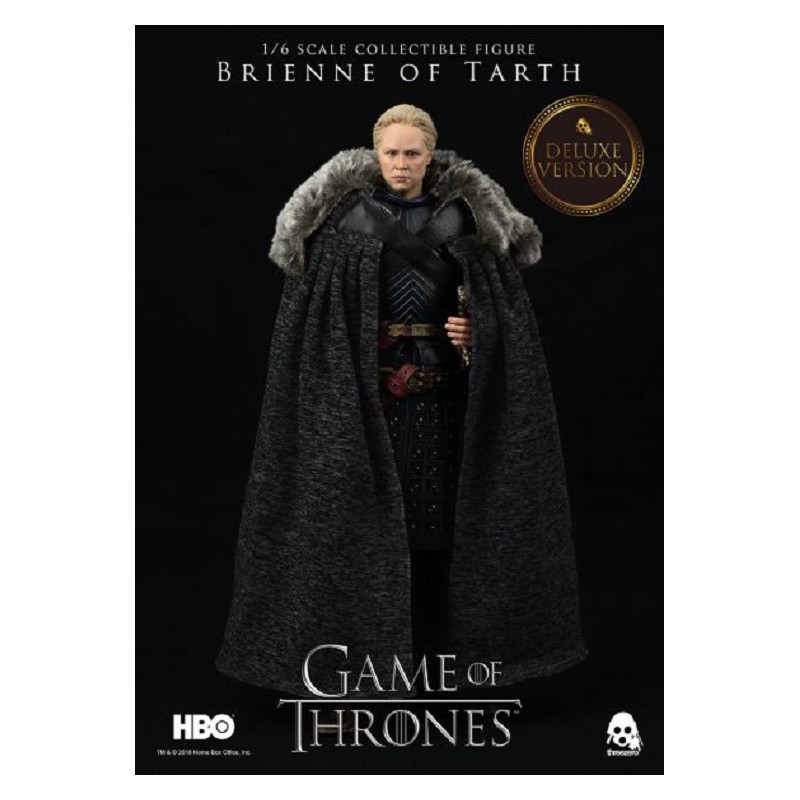 One of the most beloved characters in both novels and TV series, Brienne of Tarth is the daughter of Selwyn Tarth, lord of Evenfall Hall on the island of Tarth.
Brienne is one of the best warriors in Westeros, despite the fact that she is not often respected for being her woman.
Brienne first sides with Renly Baratheon in the War of the Five Kings, she then swears her allegiance to Catelyn Stark with a mission to protect her daughter Sansa from her.
In this deluxe edition figure, represented in 1/6 scale, Brienne wears her armor and is accompanied by her swearing sword, forged in Valyrian steel and given to him by Sir Jamie Lannister.
High quality accessories and clothes make this exclusive action figure unmissable!

Choose just the best for your action figures collection

Games and Comics chooses for you only the most captivating and exclusive proposals of the best brands to guarantee you can find all the collectibles you have always wanted for your collections.
From board games to action figures, passing through cups and doormats; on our Online Shop you will have the opportunity to buy exactly what you want so that you do not miss anything.
Discover all the offers that we have dedicated to many proposals and do not miss our promotions available on many new pre-orders.